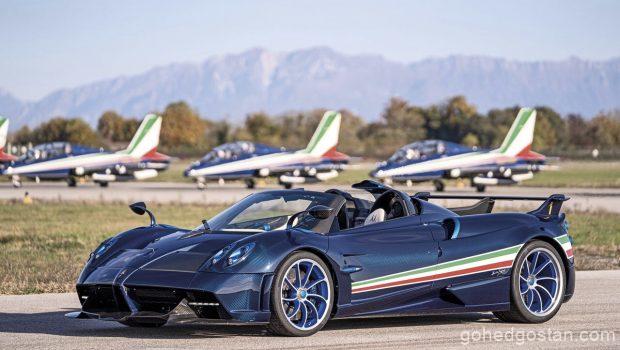 On the occasion of the 60th anniversary of the Frecce Tricolori, Pagani Automobili is pleased to present the Pagani Huayra Tricolore. Only three examples will be built as a tribute to the Italian Air Force Aerobatic Team. The 313th Aerobatic Training Group – the official name of the Italian Air Force Department founded on 1 March 1961 at the Rivolto military base – better known as the National Aerobatic Patrol (Pattuglia Acrobatica Nazionale, P.A.N.) or the Frecce Tricolori, is heir to an all-Italian tradition of collective aerobatics with roots that go all the way back to the 1920s. With their ten Aermacchi MB-339A P.A.N. jets, nine flying in formation and one solo, the Frecce Tricolori are one of the most famous aerobatic patrols in the world. They have dazzled an international audience of spectators for over half a century with their unparalleled aerobatics, demonstrating the dexterity and skill of which only the best pilots are capable. In fact, the flight of these ten aircraft represents a combination of perfection, discipline and the highest professionalism, the quintessence of group unity but also a sense of beauty. Theirs is a single mission: to display the tricolour of the Italian flag across the skies. In 2010, Pagani paid tribute to 50 years of such excellence by presenting the Zonda Tricolore, a Hypercar of which only three examples were made. Today it is one of the most exclusive and sought-after Zonda models in circulation. In 2020, the Frecce Tricolori reach their 60th anniversary and Pagani is about to celebrate this new milestone by adding another piece to a mosaic created from passion, tradition and the spirit of collaboration.

Created in an ultra-limited edition, the Pagani Huayra Tricolore evokes the unmistakable lines of the air patrol’s Aermacchi jets and combines, in every detail, aeronautical science and the elegance of form, once again pushing the concept of an ultra high performance car another step forward.

The inspiration: the Aermacchi MB-339A P.A.N.

Knowing how to fly in formation requires great skill on the part of pilots, but above all extreme discipline and extensive training. Even more than this, it implies the ability for excellent teamwork. Throughout history, right from the initial training practices, aerobatics has also served to demonstrate the skills of pilots and aircraft, the technological knowledge and the skills of men who designed new flight manoeuvres. Working well at the highest level is today the core identity of the Air Force’s aerobatic group, whose squadron flies jet aircraft capable of a speed of 898 km/h above sea level and able to perform the most extreme manoeuvres in the Frecce Tricolori aerobatic repertoire, thanks to their ingenious design. In some very low speed figures, in fact, the advanced aerodynamics of the MB-339A means the powerful aircraft will never stall and enables its engine to collaborate even in the most complex and risky manoeuvres. Creating a car that is safe and reliable in all conditions is one of the key objectives of the design and development of every Pagani project, and the design flair of an aircraft like the MB-339A of the National Aerobatic Patrol has, from this point of view and many others, been an enormous source of inspiration for the development of Huayra Tricolore. From the new body made from advanced composite materials, specially designed and developed to reach new targets in terms of lightness and performance, to the development of a new, more updated version of the powerful Pagani V12 and the application of aeronautics-derived technologies, materials and production processes: in every aspect and in the most minute detail the Huayra Tricolore echoes the unmistakable design of the Frecce Tricolori planes and reflects their concepts of style, as a tribute to the aerobatic flight group that has painted skies around the world with the tricolour for the last 60 years.

As in every Pagani project, in which scientific research and attention to detail combine with the aim of producing shapes, surfaces and materials that are highly efficient and at the same time able to captivate the senses, also in this new Hypercar, each component expresses the perfect combination of form and function, Art and Science. Packed with stylistic and aerodynamic details, the Huayra Tricolore is elegant, extremely efficient from an aerodynamic point of view, and as impetuous as a fighter-jet.

A more pronounced front splitter with a completely new aerodynamic profile has been designed to ensure maximum downforce, while the new front bumper with side extractors maximizes the efficiency of the intercooler and ensures adequate heat exchange for the powerful Pagani V12, necessary to achieve maximum performance. Intake efficiency is also guaranteed by the new airscoop, equipped with an innovative air conveying system that allows for an even greater flow of cold air directly to the engine and, in its lines and extension towards the rear wing, evokes the visual language of the aerobatic patrol’s Aermacchi planes. A new, further optimized rear diffuser has been designed to maximize the extraction of air from the underbody. Meanwhile, the new wing, fully integrated with the rear hood with which it forms a single carbon fibre component, allows perfect aerodynamic balance, compensating for the increase in downforce at the front. Careful attention to particulars, even the tiniest details of the Huayra Tricolore design celebrate the technical prowess of the Aermacchi MB-339A P.A.N.: this is the case of the rear wing supports, whose shape recalls the tail fin of the iconic jet and which display the number of the car on the outer side in the unmistakable lettering used to number the patrol aircraft. In the center of the front hood there is a Pitot tube, the instrument that allows each aircraft to measure the macroscopic air speed and, therefore, determine the aerodynamic condition of the aircraft, indicated by the resulting dynamic pressure: this is a reference to the world of aviation and a tribute to the aircraft of the Frecce Tricolori fleet.

But the most direct and evident stylistic reference to this symbol of national excellence is provided above all by the external livery, where the tricolour, like an impetuous engulfing flow of air, runs along the side of the car, extending up to the rear light clusters, and matches with the characteristic translucent blue carbon color. From the design of the rims, inspired by the propeller of a turbine, to the anodized aluminium frames of the side air intakes and front headlights, typically inspired by aeronautics and machined from billet, the tribute to the National Aerobatic Patrol is reproduced in every detail of the Huayra Tricolore.

Performance in every detail

The Pagani Huayra Tricolore represents a concentration of specifically aeronautical concepts and technologies developed for a car. The long journey of design and development has not only impacted the aesthetics of the car, but it has also involved a meticulous rethinking of all of the car’s technical-engineering equipment, with particular attention to research on lightness, allowing the Huayra Tricolore to achieve its maximum performance. The new chassis made from the latest generation composite materials, such as Carbo-Titanium HP62 G2 and Carbo-Triax HP62, has enabled considerable improvement in mechanical properties, in terms of torsional and flexural rigidity, thus ensuring a better dynamic response of the car during driving and greater safety in critical conditions. The geometry of the suspension assembly is designed to effectively transfer all 840 HP of the Pagani V12 to the ground, reducing dive and roll effects, during braking and cornering respectively. In combination with the electronically-controlled active shock absorbers, interconnected with the active aerodynamics to further enhance the stability of the vehicle, it ensures a perfect dynamic balance, adapting the car’s set-up to driving needs. The Huayra Tricolore is powered by the new Pagani V12, the twin-turbo engine specially developed by Mercedes-AMG, capable of delivering 618 kW (840 HP) at 5900 rpm and 1100 Nm of torque from 2000 to 5600 rpm in its latest version. All the power and exceptional responsiveness of the engine are transferred to the ground by the seven-speed sequential gearbox with electromechanical differential. The entire transmission system is 35% lighter than a dual clutch gearbox, while the transverse structure not only provides significant overall weight savings, but also helps to drastically reduce the effect of polar inertia, limiting the typical tendency to oversteer that normally affects mid-engined cars.

The flywheel-clutch unit, consisting of an ultra-light tri-disc clutch, an electronically controlled differential and a racing-derived tripoid coupling system, reduces potential friction losses from the gearbox to the rear wheels. The entire system, which is 4 kilos lighter than previous two-disc units, ensures a significant increase in responsiveness in high-performance gear changes.

Interior – Inside the cockpit of an Aermacchi MB-339A P.A.N.

Since ancient times, flying has been one of man’s greatest ambitions, intimately linked to the desire to overcome his own limits and push himself beyond insurmountable barriers. And it is not surprising that even today we are still deeply attracted by an extraordinarily complex machine like the airplane, and continue to be fascinated by it even after our first flight. Technology and performance aside, there is one part of the aircraft that always arouses great interest, and that is the cockpit: equipped with the most sophisticated control instrumentation, it allows the pilot to use his senses and control the aircraft in an environment where human beings are not natural inhabitants. From this perspective, the cockpit of the Aermacchi MB-339A is a masterpiece of aeronautical science and is amazing because of its ingenious design, aimed at ensuring lightness, functionality and robustness from all points of view. These are the same principles that have guided the creation of every Pagani car for over twenty years. Even in the choice of materials and interior design, the Huayra Tricolore is deeply inspired by the planes of the National Aerobatic Patrol and honors them in every detail. All aluminium components are made from aerospace grade alloys and machined from billet, before being anodized in the distinctive blue color. The gear knob, carved from a single block of aluminium and carbon, is then milled through a five-axis numerical control center and finally hand polished with the special transparent treatment. The painstaking research dedicated to lightening, which has always characterised the study underlying every project of the Pagani Atelier, has certainly not overlooked the interior of the new creation, in which every element has been carefully researched and redesigned, as in the case of the floor mats made of composite materials. Packed with celebratory details, the seats, with the exclusive two-tone coloring in white and blue – recalling the original configuration of the Zonda Tricolore interior – and the leather inserts with white, red and green stripes, are a direct tribute to the patrol aircraft, with the unmistakable emblem of the Frecce Tricolori chiselled on the four-point seat belt fastener or finely embroidered on the headrests. The undisputed star of this symphony of aesthetic and technical details that is the Huayra Tricolore’s cockpit, is the anemometer of the central console that, through the outer Pitot tube on the front hood, detects the air speed and informs the occupants by means of a dedicated indicator.

Limited to only three examples

Once again three unique creations, an ultra-limited edition to capture another unrepeatable moment in time. As a tribute to the Frecce Tricolori and their 60 years of history, each of the three Huayra Tricolore examples bears the iconic numbering that defines the three main leaders of the formation, which usually consists of ten aircraft: Number 0 – Commander: He is the eleventh member of the patrol and directs the display from the ground, as well as all the stages of mission planning and training; Number 1 – Head of Formation: He leads the patrol during all aerobatic manoeuvres. His commands decide the pace of the flight; Number 10 – Soloist: He splits off from the group in the most spectacular sequences. His job is to show the high performance of the aircraft in flight, respecting the entry times between the figures of the formation.