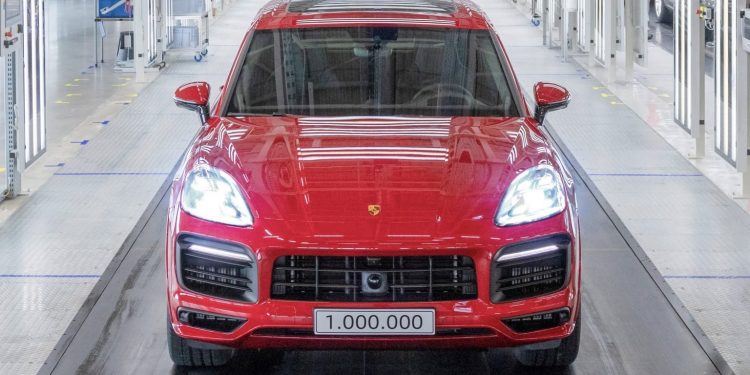 “A stool is more stable on three legs than just two.” Hans-Jürgen Wöhler quotes his predecessor and settles back for a brief journey in time. He was Vice President of the SUV product line until recently. The Porsche 911 and the Boxster models, which were already available in the 1990s, represent two legs of the stool. The Cayenne concept was conceived at the end of the decade. Porsche presented the company’s first SUV to the world public just a few years later in 2002. Eighteen years on, the one millionth Cayenne rolled off the production line in Bratislava in Slovakia: a GTS in Carmine Red that was delivered to a German customer.

The Cayenne is the epitome of an SUV and has established an entire segment. It continues to set new standards and to surpass itself. It rescued the company from a crisis, pioneered hybridisation and set new records. Porsche grew in size and profitability thanks to the Cayenne. To this day, this SUV is a symbol for the success story of the company. But first things first.

Courageous: an SUV with Porsche DNA

The large drop in the dollar exchange rate, the model policy and the high production costs created problems for the company from 1986 onwards; Porsche was heading for an economic low point. The sports car manufacturer sold 23,000 cars in 1991, half as many as five years previously. Losses added up to 240 million Deutschmarks by the end of 1992. The low point was reached in the fiscal year 1992/1993 with sales of only 14,362 vehicles; in the fiscal year 1989/1990, the sales volume was still 31,235 units. A short time later, in January 1993, the Boxster concept, presented by the Swabians at the Detroit Motor Show, received a very enthusiastic reception. The company seemed to have reinvented itself. Porsche then produced the Boxster sports car, also a two-seater, alongside the 911 product line. It ensured a strong upturn with 32,000 cars sold in 1996.

But you do not rest on your laurels in Zuffenhausen. It has always been like that. The next step was to decide which model could supplement the range in the near future. What would people be craving at the beginning of the 21st Century? What needed to be developed at the end of the 1990s? Gazing into the crystal ball: what car could be appropriate for the market? What could boost revenue? A third two-door car from Zuffenhausen? No, not another two-door car. The “Colorado” project was launched: a collaboration with Volkswagen as Porsche did not want to go it alone with an off-road vehicle. The requirements: powerful with dynamic driving features and suitable for all types of terrain. A five-seater family car with typical Porsche DNA. Sporty.

“It was a bold decision to build an SUV at the end of the 1990s, but this decision meant that Porsche was able to surpass all expectations just a short time later,” remembers Wöhler, who started working for his first employer immediately after completing his studies in mechanical engineering with an emphasis on automotive engineering. “The brand generates an incredible level of fascination. Back then, I was planning on staying with Porsche for about three years. And I never actually left,” recounts the 61-year-old. Some things just take their own course, dictate their own success story. “Ferry Porsche once said that if we would build an off-road vehicle in line with our quality concepts, it would certainly sell,” says the native from Hamburg, quoting the founder of the company. How right he was.

Hemmingen: the birthplace of the Cayenne

The idea of the Cayenne was born: along with an idea that Porsche would do everything differently with this new model. Zuffenhausen took the lead in its development. As there was no capacity at Weissach, Porsche rented a 3,800-square-metre factory site in the industrial park “Nord” in Hemmingen, a community with 8,000 inhabitants, approximately halfway between the parent plant and the Development Centre. Inconspicuous, surrounded by fences and with mirrored glass windows. Multiple conversions ensued, along with the construction of a multi-storey car park on the green field next door for the staff, unit carriers and prototypes.

The Vice President of the new SUV series at the time, Klaus-Gerhard Wolpert, got straight to the point in the internal newsletter Carrera (edition 9/1998): “Simultaneous engineering – this is its heartbeat.” Deemed an “investment for the future”, Porsche shared the Hemmingen site – created for the “Colorado” project – with Volkswagen, to make the new sports utility vehicles Cayenne and Touareg ready for series production. Master mechanic Karlheinz Bolz: “In order to set up the lifting platforms between the support columns in the workshop, we cut out paper cars and moved these about on the drawings until they fitted.”

The Cayenne was announced for the first time in 1998 – although not yet with its final name – with the team moving onto the site in Hemmingen one year later. The planned “sporty and all-terrain utility vehicle” quickly evolved to become the third pillar of the business behind the 911 and Boxster, but also the driving force that helped to pull the company out of a crisis. Zuffenhausen was out of the question as a production site; the headquarters were operating at full capacity with the 911. A new plant was therefore built in Leipzig.

It was completed approximately two years after the ground-breaking ceremony. Porsche was taking a big risk with considerable investments in production. But that is also part of what makes this company what it is – exploring new paths, demonstrating courage, making the most of opportunities. The Cayenne was ready in time for the plant’s opening ceremony in August 2002. Porsche presented it just a few weeks later in September 2002 at the Paris Motor Show.

The “Colorado” strategy was a success. Porsche made a profit with the Cayenne and strengthened its collaboration with the Wolfsburg-based company along the way. This is just the beginning of a product line success story spanning three generations. Porsche offered an additional body variant with the Cayenne Coupé from 2019.

The first Cayenne generation was designed by the Chief Designer at the time, Harm Lagaaij, and started out as the Turbo and S models. The derivative GTS and Turbo S models were added with the model update, followed by the Diesel. More than 275,000 cars rolled off the production line altogether. The second generation includes the S Hybrid, which later becomes the S E-Hybrid. In 2014, Porsche again set new standards with the first plug-in hybrid in the premium SUV segment.

“Hybridisation has great significance for us since we brought eight- and six-cylinder engines to market,” explains Wöhler. “Our hybrid concept was a major milestone for the Cayenne on its journey to becoming the plug-in-hybrid 2014 with an electric range of more than 30 kilometres.” He says that, thanks to this pioneering role, the company has once again been able to tap into new markets and set a further benchmark, first as a hybrid, then as a plug-in hybrid. The third generation was brought to market in 2017 with increased driving dynamics, optimised everyday usability, as well as reduced consumption and CO2 values.

The numbers also speak for the SUV and highlight its success: in the 2007/2008 fiscal year, the Cayenne overtook the Porsche 911 by almost 50,000 units, with an overall production of more than 105,000 units. Speaking of overtaking: the TransSyberia Rally covers a route of more than 7,000km in two weeks. It’s a demanding off-road marathon that took place from 2003 to 2008. The Cayenne performed magnificently here as well, taking the first three places in 2007.

One year later it actually took the first five places. Porsche secured an entry in the Guinness Book of World Records 10 years later when the Cayenne pulled a 285-tonne Airbus A380 for 42 metres. The sports car manufacturer trumped the existing record for a “series production car pulling the heaviest aircraft” by 115 tonnes.

A Porsche is even more at home on the racetrack than on an airfield, and that is particularly true for the Nürburgring Nordschleife. Ideal for test drives, races and record attempts, if you can hold your own in the “Green Hell”, you can compete anywhere in the world. As the first SUV, the Cayenne Turbo S achieved a lap time there of less than eight minutes. “Our goal is always the same: to beat our own time,” comments Wöhler on the challenge of sending an off-road vehicle to the renowned track in the Eifel region

Headroom even without a partial cabriolet

Porsche did not compromise from the very start, even in terms of design. It was all or nothing. The Porsche genes steer the decision-making. Wöhler: “We took a look at the competition and opted for an elegant visual appearance paired with striking sportiness. It was important to us that even the back seats had sufficient headroom. We have achieved a perfect roof line. The impression of space was vastly improved thanks to the excellent idea of installing a panoramic glass roof.”

Just before the market launch of the Cayenne at the start of the millennium, the designers and developers were considering further versions of the new model. A partial cabriolet with a high C-column was discussed, and a 1:1 model was created for its presentation. The model with the Targa-like bar was well received – but it was decided not to proceed as it was almost impossible to forecast the sales figures. With the 911, Porsche learned to offer different variants within the model range.

“It made perfect sense to expand the SUV range as well, increasing our share in this growing segment of the market,” says Wöhler, making the link to the Cayenne Coupé. “With this car, we introduced a model to the market which creates an even stronger link between the everyday usability of an SUV and the driving characteristics of a sports car.”

Chief Designer Michael Mauer explains how Porsche has managed to integrate the 911 genes in the Cayenne. “In a Porsche 911, each design element must be strong enough so that it can be transferred to a Panamera or Cayenne as well. We derive our brand DNA from the 911. We have transferred the continuous light strip as a Porsche 911 element, for example, first to the Panamera and then to the Cayenne in the third generation. Now it is also part of the brand identity.”

Back to the now not-so-secret site in Hemmingen. Nearly 700 employees work there today and Wöhler believes “it has its own soul. Everyone knows each other.” He believes this was caused mainly by the way the site came into existence. After all, Porsche and Volkswagen worked there together on what would later prove to be a successful project. Cayenne and Touareg, Stuttgart and Wolfsburg. “Hemmingen is ideally located in our network of sites.” Wöhler remembers the good old days when you could drive prototypes in and out of the site without being photographed.

When asked about the future: “Cars will change in the next 10 years. The Cayenne will continue its journey and will continue to be the best SUV in its segment. I can happily hand over the reins to my successor,” says Wöhler, who is now fully focused on the second successful SUV from Porsche, the Macan. He is referring here to Dr. Manfred Harrer, the new Vice President of the Cayenne product line, who can now continue to write its success story. Beyond the one million mark.