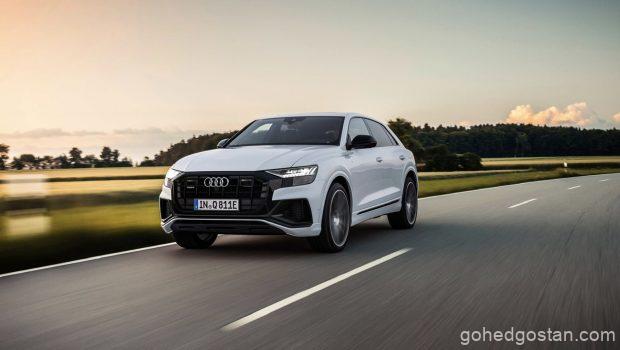 Audi is continuing its electrification offensive with the Q8 TFSI e quattro: The SUV Coupé is already the seventh model with plug-in hybrid drive that has been newly introduced on the market since mid-2019. Audi is putting this drive technology completely at the service of the customer: It provides customers with a confident electric driving experience, simple charging management, and a high level of everyday usability.

The strengths of two worlds: a high-octane TFSI and a powerful electric motor

Like every plug-in hybrid, the Audi Q8 TFSI e quattro combines the power of two worlds. Its combustion engine, the 3.0 TFSI, outputs 250 kW (340 PS) and produces 450 Nm (331.9 lb-ft) of torque4. The V6 complies with the latest Euro 6 AP emissions standard. The electric motor is a permanently excited synchronous machine (PSM) with a peak output of 100 kW. The compact electric motor is integrated in the housing of the eight-speed tiptronic. Together with the coupling, which connects the 3.0 TFSI to the drivetrain, it forms what is known as the hybrid module.

The lithium-ion battery is installed under the luggage compartment. It contains 104 prismatic cells of the latest generation that are bundled into 13 modules. Each of these cells with flexible outer skin provides an electrical capacity of 48 Ah, and the battery system has an energy capacity of 17.8 kWh. This is 0.5 kWh more than the battery with which the Q7 TFSI e quattro was first sold in 2019. The Q7 is now also fitted with the battery of the latest generation, which has an increased capacity and is also more compact and around 40 kilograms (88.2 lb) lighter.

Liquid cooling, which forms its own low-temperature circuit, is an important factor for the energy capacity and performance of the battery. If necessary, it can be connected to the coolant circuit for the air conditioning system or coupled with the second low-temperature circuit, which controls the temperature of the electric engine and power electronics. It converts the direct current from the battery into three-phase current to power the electric motor. During recuperation, it feeds direct current back to the battery.

The electric motor and the 3.0 TFSI transmit their forces to an eight-speed tiptronic that shifts quickly and comfortably. Its electric oil pump ensures the supply even when the V6 gasoline engine is deactivated. The quattro permanent all-wheel drive system uses a center differential with purely mechanical regulation. During normal driving operation, it distributes 40 percent of the torque to the front axle and 60 percent to the rear; if needed, it can direct the larger share of power to the axle with better traction. Up to 85 percent can be distributed to the front axle and up to 70 percent to the rear axle.

Intelligent and efficient: hybrid management and the predictive operating strategy

The hybrid management of the Audi Q8 TFSI e quattro** choses the optimum operating strategy for each journey automatically. The SUV Coupé starts in fully electric “EV” mode. At low speed, a loudspeaker located in the right front wheel arch outputs the legally prescribed warning sound (AVAS, Acoustic Vehicle Alerting System). The gasoline engine is activated only when the driver depresses the right-hand pedal, known as the “active accelerator pedal,” beyond a specific level of resistance. If they want to drive on electric power as much as possible, they can select “EV” mode in the central MMI display.

“Hybrid” mode, which is the main operating strategy of the Audi Q8 TFSI e quattro, comprises three operating modes: “Auto,” “Hold,” and “Charge.” In “Auto” mode, the hybrid system selects the optimum drive type automatically: fully electric at low speeds, the TFSI engine at higher speeds, and often a combination of the two. Information from the immediate environment provided by the MMI is taken into account even when navigation is deactivated.

The predictive operating strategy is activated when route guidance is started in the standard MMI navigation plus. Its task is to spread the battery charge over the driving route in an intelligent and efficient way. In addition, the predictive operating strategy can charge the battery in efficient engine run phases in order to be able to run on fully electric power during ineffective phases later on, such as traffic jams or city traffic. On the basis of the large amount of data it uses for this purpose, it develops a long-distance journey plan that is constantly updated using the navigation, environmental, and online traffic data.

In “Hold” mode, the operating strategy pursues a different goal: It keeps the battery’s existing state of charge at the current level with minor deviations. In “Charge” mode, the aim is to charge up the battery as far as possible while driving. This makes sense when the journey ends in an urban area and the last kilometers are to be covered on purely electric power. With the market introduction of the Q8 TFSI e quattro, its sister model, the Q7 TFSI e quattro5 will also include this mode.

Who brakes wins: up to 80 kW recuperation power

The predictive efficiency assist is an important system in the Q8 with plug-in hybrid drive. When the driver takes their foot off the accelerator pedal, it is decided whether the car switches to freewheeling with deactivated TFSI (“coasting”) or whether it decelerates via the electric motor and thereby recuperates energy. It can regain up to 25 kW of power just by coasting. In addition, the electric motor performs all brake applications up to 0.3 g – the vast majority in everyday driving. The hydraulic wheel brakes are activated in addition only in the case of heavier deceleration processes. The transition is virtually imperceptible; the brake pedal always provides excellent feedback and can be modulated precisely. The Audi Q8 TFSI e quattro achieves up to 80 kW of recuperation power while braking.

When the adaptive cruise assist system (optional) is activated, the predictive efficiency assist becomes active not only during deceleration but also during acceleration. If it is switched off, it provides the driver with prompts that indicate when it would be sensible to take their foot off the right-hand pedal: The driver feels an impulse in the active accelerator pedal and sees information displayed on the head-up display (optional) and the Audi virtual cockpit (standard).

The Q8 TFSI e quattro can be equipped with many state-of-the-art driver assist systems. One of the most important of these systems is the adaptive cruise assist, which can take over the majority of the operations for accelerating, decelerating, and keeping in the lane for the driver over long distances without relieving them of their responsibility. A vehicle safety test performed by Europe’s most important committee, the NCAP consortium, focused on level-2 systems: The Q8 achieved the top score in this practical test.

Up to seven driving profiles: the Audi drive select system

The Audi drive select system also comes as standard in the Audi Q8 TFSI e quattro. It offers a choice of up to seven driving profiles: comfort, efficiency, auto, dynamic, individual, offroad, and allroad (with adaptive air suspension sport, standard in the top-of-the-line version). Audi drive select accesses the characteristics of the 3.0 TFSI, the tiptronic, the air suspension (optional with the Q8 55 TFSI e quattro), and power steering, for example. Depending on the settings, the way in which the different suspension systems work together also changes. For example, if the dynamic profile and the S mode of the tiptronic are activated, the electric motor provides a powerful additional boost as soon as the driver accelerates. When decelerating, freewheeling is blocked in this setting, allowing the drive to always recuperate.

Like all plug-in hybrids from Audi, the Audi Q8 55 TFSI e quattro and the Q8 60 TFSI e quattro impress with a high level of everyday usability. They offer a generous amount of space for five persons, and their luggage compartments with the even loading floor that is easy to load provide a volume of 505 liters (17.8 cu ft) even in the base configuration, which increases to 1,625 liters (57.4 cu ft) when the rear bench seat is folded down. Depending on the equipment, they can pull trailers weighing up to 3.5 metric tons (7716.2 lb) (braked, 12 percent incline). Their quattro drive guarantees decisive advantages in terms of traction.

Extremely convenient: charging at home and on the road

The new plug-in hybrid models come with a charging cable for household and industrial power sockets as standard. With the maximum charging capacity of up to 7.4 kW, an empty battery can be fully charged in around two-and-a-half hours. If desired, customers can procure Volkswagen Naturstrom, which is generated from 100 percent renewable energy sources.

With the myAudi app, customers can use customized services from Audi connect on their smartphones. These services allow them to check the battery and range status, start charging processes, program the charge timer, and view the charge and consumption statistics. The charging stations are listed in both the app and the MMI navigation plus. Another function of the myAudi app is the pre-entry climate control of the interior before starting the journey. Depending on the equipment, the steering wheel and seat heating as well as the seat ventilation can be activated.

In addition to the cable for the garage, the Audi Q8 TFSI e quattro also includes a mode 3 cable for public charging terminals. Upon request, a charging service owned by Audi, the e-tron Charging Service, grants access to 150,000 AC charging points in Europe with just one card.

Presales of the new large plug-in hybrid are about to start in Germany and other European markets. The Audi Q8 55 TFSI e quattro with 280 kW (381 PS) is on the price list from EUR 75,351.26 (including 16 percent value added tax), and customers can claim incentives worth EUR 5,625.

The Audi Q8 60 TFSI e quattro is available from EURI 92,800 (including 16 percent value added tax) and shows off its sporty performance in no uncertain terms. The standard S line exterior package sharpens its appearance with striking design details at the front, the sides, and the rear. The black styling package contrasts with the S line exterior attachments in body color. Matrix LED headlights come as standard, as does the adaptive air suspension sport. Size 285/45 tires are mounted on the 21-inch wheels, and the brake calipers are painted red. The S line sport package immerses the interior in black or partially in rotor gray (on the seats). It includes sport seats with S embossing, pedals and footrests made of stainless steel, and inlays made of matt brushed aluminum.